skip to main | skip to sidebar

The third year anniversary of the Basin Fire coming to Tassajara is coming soon - July 10, 2011. Just three days before that, on July 7, the history of the fire will be published, Fire Monks. It is a really good read, sometimes bringing those days three years ago almost too much to life. Thanks to author, Colleen Busch.
Posted by Leslie at 9:28 AM 3 comments:

What you don't expect...

Everyone has been looking to the skies for signs of impending danger. Rain, snow, wind.

And so, on Sunday the earth moved to remind us that it too can cause problems. The houses in Jamesburg shook noticeably with this earthquake.
Posted by Chris at 9:04 AM 3 comments: 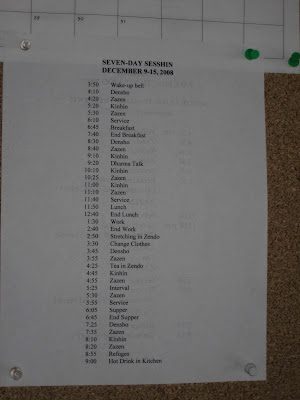 If you want to follow along at home, click on the picture to see an enlarged image.

Including the dharma talk and meals that's nine and a half hours of sitting. An hour of kinhin. Over two hours of free time for bathing and whatever. And 40 minutes sauntering towards your seat after the densho bell is struck.
Posted by Chris at 4:18 PM No comments:

Driving up the road from Tassajara on Monday afternoon I found an unusual roadblock just below Lime Point. One of Monterey County's graders was stuck with its back wheels off the road where they had removed burnt supports. I turned around and went back down the hill for a bath and a hot drink. 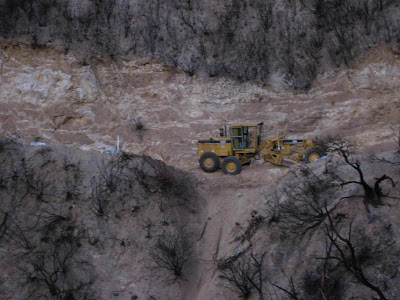 A couple of hours later I tried to drive out again and found that attempts to drag the grader out of the hole were just starting. With each attempt the grader tilted further towards the steep drop without moving back towards the road. As darkness fell it became obvious that the grader would stay stuck overnight until a crane could be driven to pick the grader up and lift it back onto the road. 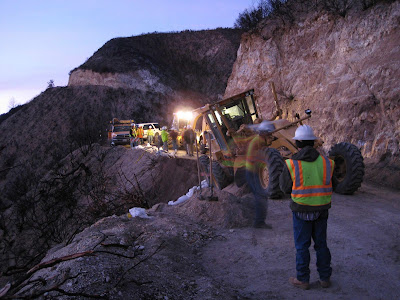 After they'd moved the tow-truck out of the way there was just enough space to squeeze the car between the workings and the cliff wall. I left the road crew working to clean up the site at the end of a very long day, and with a drive back to Salinas still ahead of them. 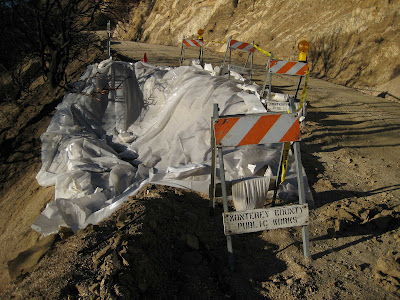 One of the sites where the road crew have removed burnt supports.
Posted by Chris at 3:06 PM 1 comment: 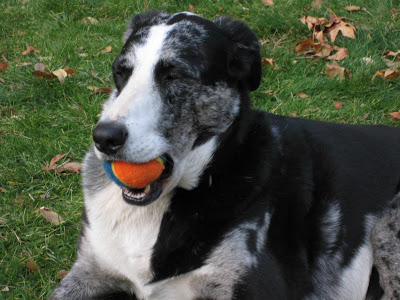 While City Center and Green Gulch are in sesshin Tassajara continues with the normal daily schedule. Yesterday was a personal day with pizza dinner, today the wake-up bell rang at the usual 3.50am.

The 7-day Rohatsu sesshin starts on Tuesday, the day after the 8th. In what is becoming a common practice, several fresh faces will be joining the residents for this sesshin - to receive an invitation you must have close links with an Abbot.

Then the practice period will be almost over. A day off. The Shuso ceremony. A packing day. And finally, the goodbyes.

The winter practice period, lead by Abbot Steve Stucky, starts on January 3rd.
Posted by Chris at 2:51 PM No comments: 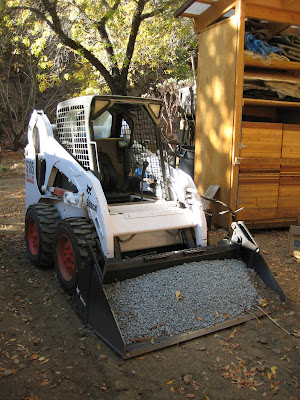 Concerned about the possibility of large mudslides and debris flows closing the road, Zen Center bought a second-hand Bobcat at the start of the practice period. Shortly thereafter it blew one of the hydraulic seals and had to go back to Bakersfield to be fixed.

A few days after arriving back at Tassajara the seal blew again and the Bobcat had to be abandoned on the road. 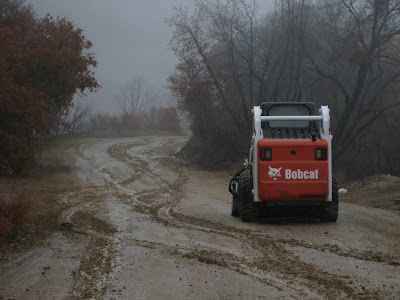 We've now exchanged this machine for another which was driven into Tassajara on Wednesday, a drive that took about 5 hours. The driver passed the time listening to Joseph Campbell and Willie Nelson.

The two kittens are now well on the way to being cats. Boy Cat is a total love machine, happy to sit on my lap purring heavily while I watched the early morning coffee drinkers ghost around the courtyard. Girl Cat is more self-reliant, to the dismay of some residents, and keeps herself amused.
Posted by Chris at 2:16 PM No comments: 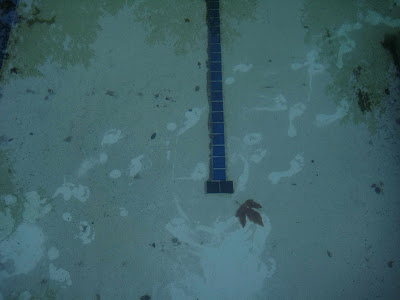 Some of the practice period students are still regularly using the swimming pool. 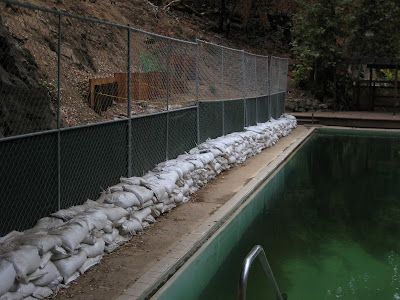 The pool is particularly vulnerable to falling rocks even now. When I was taking these pictures there was a small slide, most of which was caught by the fence. One rock the size of a football picked up enough energy bouncing down the hillside that it sailed over the fence into the pool. 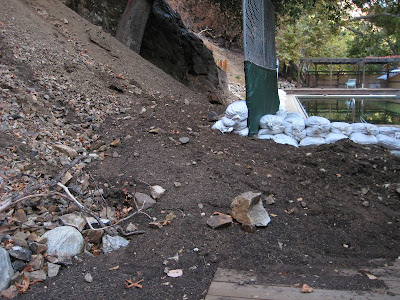 After the recent light rains this small slide reached the top of the sandbags which meant some heavy digging for the shop and general labour crews to remove the debris.
Posted by Chris at 2:36 PM No comments:

Thanksgiving started out as a work-day with that work-day gesture towards a lie-in, the 4.50am wake-up bell. Work ended at 1.15pm and after a break to clean and polish ourselves there was a short service at 2.15pm. This took place in the dining-room before an altar decorated with baskets of produce and tokens (mainly photographs) of people and things for which the residents are grateful.

Thanksgiving dinner then followed at 2.30pm. This year the kitchen spurned the accumulated years of tradition and replaced nutloaf on the menu with an excellent mushroom strudel. This was served with mashed potato, mashed sweet potato, crispy fried kale and salad. Dessert was a hearty cheesecake. Vegan, non-mushroom and other alternatives festooned a side-table.

Kathy, the work leader, was able to join us for both the work period and dinner. She has her left arm in a sling after falling from a ladder last week and breaking the arm in two places.

In the evening the dining-room was converted into a cinema for a dharma-event double feature; Amongst White Clouds and Enlightenment Guaranteed. This started late as four laptops had to be tried before we found one that had a working DVD player and would work with the projector.

The winds of change blow gently through the valley carrying the sounds of laptops from room to room. Can wi-fi be far behind?
Posted by Chris at 1:35 PM No comments: 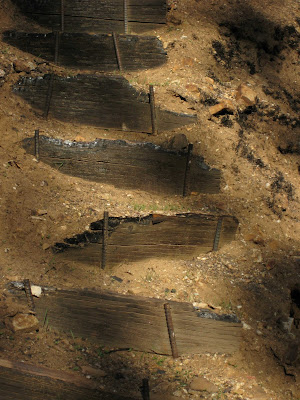 Here is a selection of Simon Moyes' photographs of the construction work.

And here is Keith Baker's account of his time at Tassajara helping to move pipes.
Posted by Chris at 10:09 AM 1 comment:

It's raining softly but steadily here with the NWS radar showing that we're getting about 0.1inches per hour. While some Tassajara residents are looking forward to a sterner test of the new defence walls, most are grateful that the heavier rains moved to the south of our area.
Posted by Chris at 9:59 AM 1 comment:

The trees come down 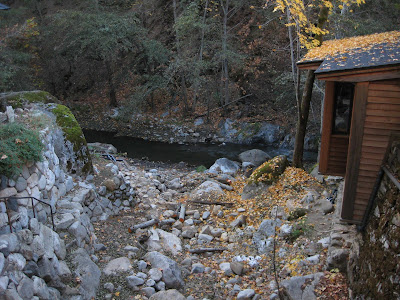 We were advised that trees close to the creek bed can act as anchors for debris when the waters rise. In particular we were warned that the handful of trees close to the junction of Cabarga and Tassajara creeks posed a threat to the foundations of the dining-room porch. So now they are gone. Did you notice the difference?

We have also been cutting fallen trees in the creek beds into smaller sections that will flow more readily downstream and felling dead trees on the road up to the water plant.
Posted by Jamesburg Crew at 4:09 PM 1 comment: